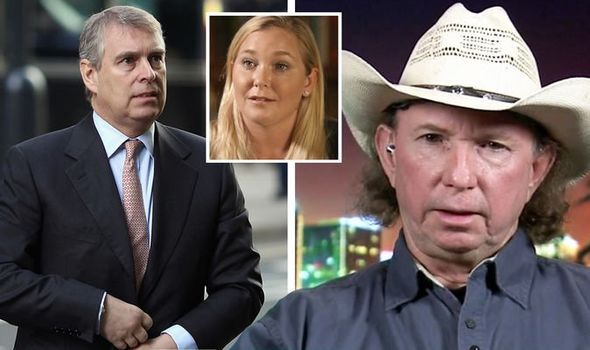 LAST MONTH Prince Andrew appeared on BBC Newsnight where he discussed his relationship with convicted sex offender, Jeffrey Epstein with journalist Emily Maitlis in a televised interview. Tonight, The Duke of York’s accuser Virginia Giuffre has given her first British TV interview on the subject. Ms Giuffre alleges she was trafficked by Epstein, and claims she was forced by Epstein to have sex with Prince Andrew when she was 17. Her allegations, which Prince Andrew strenuously denies, were struck from US civil court records in 2015 after a judge said they were “immaterial and impertinent”. Earlier today, Good Morning Britain managed to obtain an exclusive interview with Ms Giuffre’s father, Sky Roberts, who was on a live video link from America. Following Ms Giuffre’s BBC Panorama interview which was aired last night on BBC One and available on the BBC iPlayer, Mr Roberts gave his opinion on the allegations Prince Andrew faces from his daughter and suggested, in his eyes, the royal “is not telling the truth” and claimed this was because “he has everything to lose”.